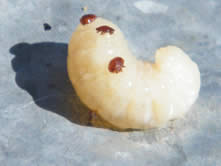 The Varroa Mite (Varroa Destructor) is a tiny parasitic mite just 1-1.6mm which enters the hive on adult bees. It then crawls into and takes up residence in the beeswax cells containing young bee larvae (brood cell) before they are sealed. Once in the cell the mite submerges itself into the larval food at the bottom of the cell and starts feeding. The mite will then lay its eggs (usually several females and one male) which develop into adults at about the same speed as the young bee matures. The adult mites leave the cell when the bee emerges and are able to attach to other bees. Once attached the suck the bees haemolymph (bees version of blood) leaving open wounds and introducing various viruses including deformed wing virus. A significant mite infection can lead to the death of the hive. As a consequence the varroa bee mite is reducing the number of bees in managed hives as well as wild native bee colonies. This has an impact not only on the beekeeping industry but also on crop pollination. Varroa mite can be treated but requires careful monitoring, hive management and rotation of mite treatments to prevent resistance developing within the mites.

Varroa is an external parasite of honey bees. Adult female mites are fairly large about 1.1 x 1.6mm. They have a hard reddish to dark brown body that is flattened and oval in shape.

Varroa mites are transferred to new bee colonies on adult bees. The mite will then leave the bee and crawl into a brood cell. Once in the cell the mite submerges itself into the larval food at the bottom of the cell and start feeding on the prepupa. The mite will then lay its eggs. The eggs will hatch and go through two juvenile stages before becoming adults. The adult mites will leave the cell when the bee emerges.

The varroa bee mite is reducing the number of bees in managed hives as well as feral or wild colonies. This has an impact not only on the beekeeping industry, but it is also potentially damaging for crop pollination and pollination of pasture legumes. The apicultural industry's major contribution to the New Zealand economy is the pollination of plants, which is worth many times the value of honey and other bee products. It is estimated that one third of the food we eat relies on honey bees for pollination, and the area of crops reliant on bees for pollination is increasing.

Varroa is widely distributed throughout the entire North Island, including many offshore islands in the Hauraki Gulf, and South Island as far south as Canterbury and the West Coast. It has not been detected on Chatham or Stewart Islands.

Beekeepers in affected areas should monitor the mite levels within their hives and treat before numbers rise to damaging levels. Varroa cannot be eradicated, but can be controlled using various organic and inorganic miticides and possibly by selecting bees for tolerance to the mite.

Visual examination of adult bees is not an effective way to monitor for varroa. However, infested hives may show the following signs:

MAFBNZ advocates ‘best practice’ management of varroa to avoid miticide residues and delay the emergence of resistance in mites to chemical treatments. 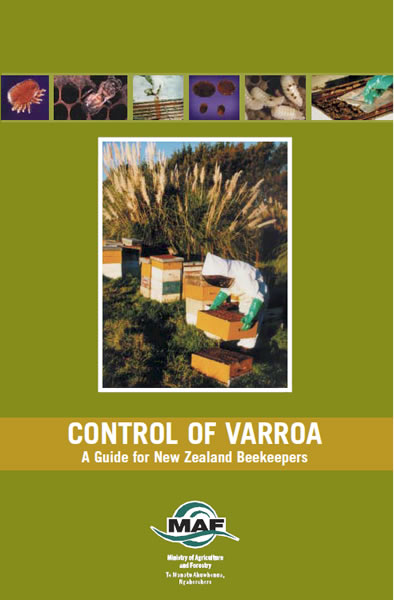 Instructions for Sugar Shake Test for Detection of Varroa Mite